THE 'WE ALL DRAW' BOOK 2015 - including practical workshops, exercises, the 'Thinking Drawings' exhibition, and 'Drawing Experiences'

The best way to share good practices is to do them, so we have included in this publication many workshop outlines, with the intention that you can recreate them in your studio or, better still, share them with your own students or community groups. We would love to hear about it if you have tried any of these ideas, so please write to us and tell us how you have adapted them for your own groups and what happened.

In this book, we bring together workshop outlines and reflections from many of the contributors to the 2015 Thinking through Drawing symposium, We All Draw, which was held on 6 – 8 November 2015 in the Bargehouse at Oxo Tower Wharf, London. For this event, we wanted to entirely avoid didactic presentations. The practical workshops have always been the most popular and memorable parts of our symposia, so we wanted to celebrate this with three days of masterclasses, workshops and performances, which we invited our distinguished panelists to discuss.

It is inevitable that we bring our own perspectives to any interaction, and indeed it is often that meeting with other perspectives that is most exciting and productive. This happened over and over, partly by design, partly by chance. Like looking from a distance, looking back in time blurs the details and reveals the abstract, the general. Looking back at my memories and notes from the thrilling fourth international Thinking through Drawing symposium We All Draw, I am struck by two themes:  the errors and biases in making drawings and the multi-modality in making them—and in thinking about them. Both were evident throughout the many workshops, and in the two drawing masterclasses we all experienced.

In her masterclass, Andrea had us draw an origami box. Boxes are familiar, and this one was square with many right angles, symmetric and equivalent along two axes. A snap. Perspective drawing is a highly-practised skill for most of the drawers. We then unfolded it part by part, drawing that unfolding in order to use the drawing to reassemble the box. Now the drawing has to show process, not product; it has to show change of appearance not stability of appearance. That simplicity and that symmetry were consequences of processes and changes that were anything but simple or even symmetric as they happened. Showing change defies drawing perspective; you have to draw something in flux, you have to draw what came before and what will come after; you have to draw transition. Even if the object has discrete parts and discrete steps and simple shapes. How do we do that? We are compelled to deconstruct. And reconstruct. We can flatten, showing more than can be seen at one viewing or at one time. We can add things that can’t be seen, arrows, guidelines, words. The hands do more than draw, they fold and unfold and refold. What are the order and the direction and the consequences of the foldings? The actions of the hand are critical to the doing and to the thinking and then to the drawing. So the tactile has entered the undoing and the drawing and will be central if in different ways to the next steps, first re-creating a box and then assembling several boxes into a sculpture. And finally, drawing the sculpture. Fortunately, the recreations of the boxes did not have to be correct, it would have been impossible as our unfoldings had been incorrect so incorrect re-foldings were inevitable. But, hey, who likes so many symmetries and rigid shapes anyway? Then we assembled, at first with a vision, but that thought quickly got eliminated; we needed to think with our hands, our fingers - what parts of these strange shapes would fit together, how would they stay that way, how would they balance, how would they stay upright? Confronted with gravity and support, sensed by the fingers, visions disappeared. The assemblages were light and curious and wonderful. Now to draw them! Far too much for even highly-honed perspective skills. We flattened, our angles and shapes were off, we were back to being beginners. Accuracy was sacrificed, but elegance and interest gained. The eye followed the hand, feeling was first, then seeing.

In his masterclass, Kim Sloane had us draw an energetic ball of string. Transferring the energy to the hand was straightforward—we drew fast. He further suggested that we think of a centre, of going round and round the centre, again, straightforward. Since it was string we were drawing, it was good that our lines were helter-skelter. But our balls of string weren’t balls, they weren’t graspable, they were flat. They might have energy but they lacked volume, exactly what Kim wanted us to portray. How could we do that? First, we had to stop looking. Some of us started drawing in the air, going round and round an imaginary centre, feeling the increasing energy of going back and the slowing of coming forward, of twisting in one direction and then another to circle a sphere. We were tracing an invisible ball of string. Those circles had a start point, near us, then gained momentum as they moved backwards and sideways, then slowed as they came forward again, completing the circle. A nice rhythm. Now to the page, not so easy, the page is flat. The key is the changing momentum. Changes in direction transfer but how to transfer momentum? Remember, no looking. Just doing the tracing of the ball of string, faster back and slower forward, and the momentum is transformed to pressure, darker and thicker for faster and lighter and thinner for slower, dark for far and light for near. Now we have the key for drawing volume but it will take practice.
​

Barbara Tversky is a Professor Emerita of Psychology at Stanford University and a Professor of Psychology and Education at Teachers College, Columbia University. Tversky specialises in cognitive psychology. She is a leading authority in the areas of visual-spatial reasoning and collaborative cognition. Tversky's additional research interests include language and communication, comprehension of events and narratives, and the mapping and modeling of cognitive processes. Barbara received a B.A. in Psychology from the University of Michigan in 1963 and a Ph.D. in Psychology from the University of Michigan in 1969. She has served on the faculty of Stanford University since 1977 and of Teachers College, Columbia University since 2005. She was named a Fellow of the American Psychological Society in 1995, the Cognitive Science Society in 2002, and the Society of Experimental Psychology in 2004. In 1999, she received the Phi Beta Kappa Excellence in Teaching Award. Tversky is an active and well-regarded teacher of psychology courses at both the introductory and advanced level. In addition, Tversky has served on the editorial boards of multiple prominent academic journals, including Psychological Research (1976-1984), the Journal of Experimental Psychology: Learning, Memory and Cognition (1976-1982), the Journal of Experimental Psychology: General (1982-1988), Memory and Cognition (1989-2001), and Cognitive Psychology
(1995-2002).
Thinking Drawings
The Exhibition
​
As part of the symposium, we invited contributions of ‘thinking drawings’ to exhibit. We wanted to see how drawing is used as a tool for thought, or even if the drawings themselves could be considered to think. We were interested in drawings that served a purpose beyond the aesthetic.
The drawings we received are diverse.  Some capture thoughts while others trigger them. Most do both. Many represent the beginning of a process. Some reveal the planning behind a painting or a design. Others are intuitive, they spontaneously invent something new or uncover something previously obscured. Some are made as part of a process of observing and coming to know an object more deeply, whether that be a plant or a cherished memory.  Others seem to be part of a process of clarification - bringing into focus an idea or an experience. The interplay between certainty and ambiguity is notable throughout the contributions. A delicate balance between the concrete and the indeterminate creates a space to quietly contemplate possibilities.
Full documentation of the exhibition is included in the We ALL Draw book. Here are a sample of the wonderful images: Many thanks to all the artists' for their inspiring and thoughtful work. 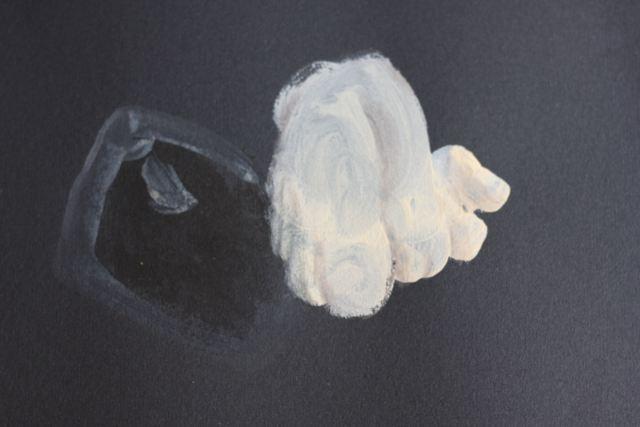 ​Lumpy and Soapy
​Alison Carlier
Emulsion, soap and coloured pencil on paper
‘Lumpy and Soapy’ is taken from a text description of a Roman pottery fragment held at The Museum of London Archive. With this drawing I wanted to test out what the words ‘lumpy’ and
‘soapy’ look like or feel like by using abstract forms. By not drawing recognizable objects, I hope that the words can be interpreted in terms of the physical form of their material selves.
My work hinges upon how language is processed. I use speech and drawing to explore the sound of words, to help understand both visceral and visual (mis)understandings and interpretations. Recently, I have been making ‘audio drawings’ where the listener hears the detailed description of an unknown object or material, and so completes the ‘drawing’ in their own imagination. 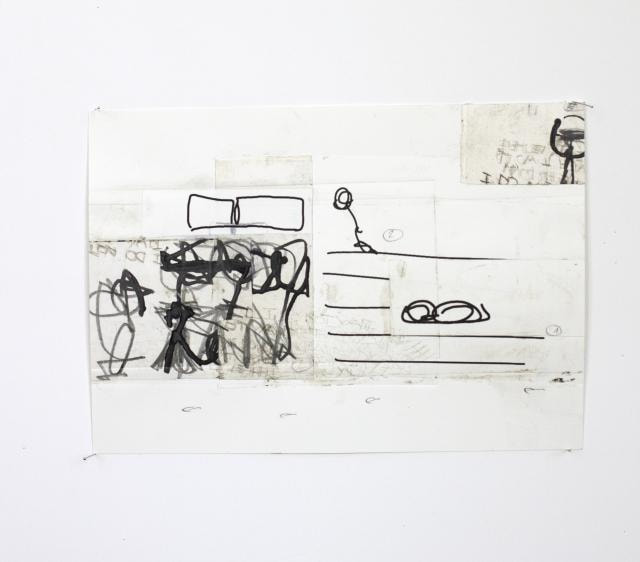 I WISH THAT EVERYTHING WAS ALREADY THERE
Ilse Schrottenbach
19 x 27cm
Charcoal Pencil, ink on paper (drawings/scribbles), Dry point etching (words)
In my works, I like to link different elements in terms of time, context and media, and let them play Ping-Pong. It is like stepping out, and looking at a pattern of perceived occurrences, evolved over time – “thought mending” somehow.
This drawing collects scribbles, drawings, some of which I made after my mother had passed away, some later. Drawing her, I used the basic forms of “my stones”, and later, I remembered us listening to music and playing the piano. In those times, I started to develop these little figures, which you would see spread all over my recent works.
They accompany me since then. ​
DRAWING EXPERIENCES
​ 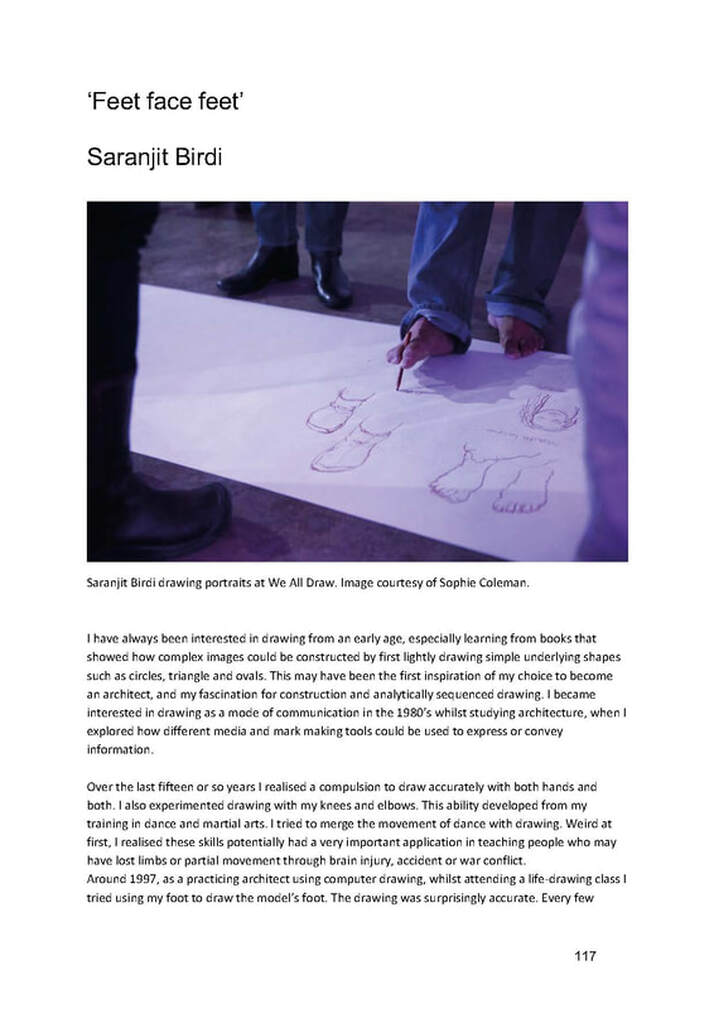